SchuF Valve Technology GmbH, located at Cork, Ireland, recently installed a new double test rig. This facility enables SchuF to test all valves and pressure-retaining parts to all major international standards, including ASME B16.34, API 598 and EN 12266-1, in a safe environment.” 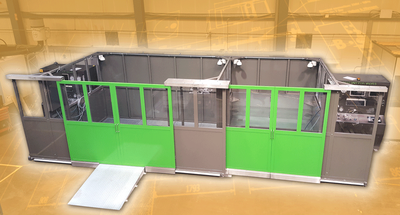 The new test facility incorporates two separate cells which can operate independently of each other.  Each cell is equipped with two high definition cameras, allowing customers the option of logging in remotely to witness testing over the internet.
A built-in Computer Registration System (CRS) enables results to be logged and test certificates to be generated for each complete examination. 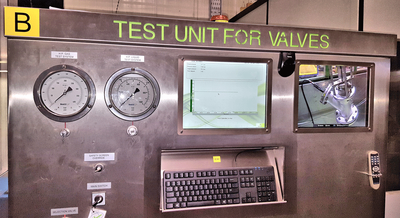 The new facility has the following test capability: 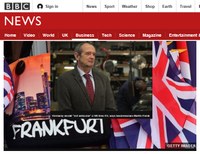 The BBC business reporter, Ben King, interviews SchuF’s Dr. Martin Frank about Britain’s vote on their EU future and the implications for Germany, Britain and Europe itself should a Brexit be confirmed

September 9, 2011 – Today SchuF Fetterolf a world leading designer of customized industrial valves announced the opening of celebrations to commemorate its one hundredth anniversary.

Established on September 9, 1911 on the outskirts of Frankfurt, Germany, SchuF was established by Josef Frank and Ludwig Schwärzel. The Group CEO and 3rd generation of the Frank family in the business Dr. Martin Frank commented:

“We could not have reached 100 years without the help of our employees present and past, our agents, suppliers and above all our loyal customers. Thank you”.

The family owned business with design and manufacturing operations in Germany, Brazil, Ireland, India, and the United States, today employs over 400 staff and continues to grow as chemical and refinery processes become more complex and require more specialized valves that the company designs.

The company started with 2 employees and within a very short period had invented three valve types – the lift plug valve, the disc flush bottom outlet valve and the piston bottom outlet valve. These inventions had a significant impact on safety in the then nascent German chemical industry. As a result the company grew quickly and expanded internationally. Further inventions followed including an angle control valve, sampling valves, diverter valves and many customer requested valve designs. Today SchuF has 20 product lines, over 300,000 designs and has sold over 1 million valves.

To mark the 100 years, SchuF Fetterolf also announced today the formal launch of three new products – a fully piggable Globe valve under the name P-GlobeTM, a new sliding design of the highly successful swinging line blinding system called the Cam-SlideTM and a new lift plug valve to complement the firms first ever invention – the lift plug valve. This new isolation valve has been called the TruEPlugTM.

The Group Chairman Mr. Wolfgang Frank who joined the celebrations with employees in Germany announced the establishment of two awards – the Dr. Josef Frank award for Project Excellence and the James Williams III (co-founder of Fetterolf) award for Innovative Design. Along with a rolling party across all SchuF Fetterolf sites, celebrations will continue throughout the year and awards will be presented to the most deserving employees.

Asked how he saw the future of SchuF Fetterolf Mr. Wolfgang Frank commented:

“We could have grown much faster in the past two decades, but that would have been at the expense of some of our core principles – an innovative atmosphere to work in, proven quality, and reliable products. We look forward confidently to the next 100 years”

Why to consider a lift plug valve

ValveWorld article: Why to consider a lift plug valve 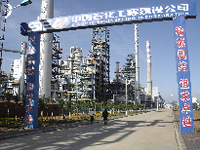 They have been installed in the Shenhua coal liquefaction plant in Inner Mongolia.

Coal Liquefaction is the process to convert coal powder into liquid hydrocarbons (gasoline, diesel and Kerosene).The process was invented in Germany by Friedrich Bergius in 1913. It is the most severe refinery conversion process with temperatures of 500°C (932°F), high pressure to 240bar (3480 psi) and a high degree of solids content in the medium. These conditions push equipment to their absolute natural limits as a result of extreme erosion.

The multi million dollar contracts were awarded in 2006 and SchuF delivered the core diverter valve and multiple pressure letdown and level control valves in 2008. The core diverter valve is a five way valve, weighs sixteen tons, and is six meter wide and six meters long. The valve has an 80mm wall thickness and solid Tungsten Carbide seats.

The SchuF Fetterolf valve solution has proven to be far more efficient than a previously tested solution based on a series of ball valves. The previous solution led to such high erosion rates that critical control valves had to be replaced within days of operation, or had to be run at half capacity. The SchuF control valves have shown no signs of erosion after the first live process run over a fourteen day trial period in 2009 and the plant output has exceeded all expectations. This is in part a result of the unique diverter valve design that prevents build up of unwanted solids that can collect in dead spaces in conventional valves or t-piece piping. 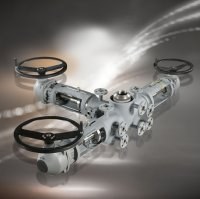 The VDU Diverter valve replaces the problematic ball valves and t-pieces. It’s design is completely dead space free. There are no crevices, nooks, or corners for sediment and debris to settle. As such the SchuF diverter valve can be seen as a seamless extension of plant piping.

Vacuum distillation is one of the most important separtion processes found in the refinery. During vacuum distillation the constituent atmospheric residue fractions are separated to produce heavy, medium, and light gas oils as well as vacuum residue.

The vacuum residue by-product that is produced is typically used as feedstock for FCC (Fluid catalytic cracking) or delayed coking. It is a thick slurry like medium with an API rating of 5° to 7°. These traits can lead to several problems, not least of which is the accumulation of particles or coke deposits that form clumps. This in turn can partially block pipelines or damage equipment.

This phenomonen is a result of the use of ball valves and t-pieces which create dead space (areas where debris can gather), at the bottom of the VDU tower. The diagram below illustrates two ball valves and a t-piece. The dead space area is shown in black on the left hand side of the diagram.

The traditional solution is to back flush the pipeline segments or valve equipment where this occurs. However, this can reduce the line capacity by an estimated 10% which can result in a revenue loss amounting to millions of dollars per annum in a large refinery.

SchuF has today launched a new diverter valve design that eliminates this problem. The VDU Diverter valve replaces the  ball valves and t-pieces. It’s design is completely dead space free. There are no crevices, nooks, or corners for sediment and debris to settle.

The piston (in green) on the left hand side closes the left leg and is flush with the inlet. The right hand piston is in the open position but seals flush with the outlet. There is no redundant space for sediment, slurry, or coke particles to settle. As such the SchuF diverter valve can be seen as a seamless extension of the plant piping.

Because the diverter valve is dead space free, continuous flushing is no longer required!

The VDU diverter valve is available in sizes from 1 inch to 24 inches and pressure classes to ASME 2500# as standard. It can be provided in a Y, R, T or star design, and has a diverse range of options including: zoned or full jacketing, contoured or rotating pistons, control characteristics, integral flushing ports, and replaceable seats.

Mr. Wolfgang Frank, Group Chairman, Managing Director, and joint owner of the SchuF Fetterolf Group announced today that he will be retiring.

The SchuF Fetterolf Group has been awarded a significant new Delayed Coking contract by a leading Canadian oil and gas company. The new Delayed Coking Unit (DCU) will be built in Montreal and will increase capacity of the refinery by 25,000 barrels per day.

The contract includes multiple thirty inch (30” / DN750) isolation valves with integral draining functionality (ASME 300# to 600# with A217 C12 as the material of construction).

Dr. Martin Frank – CEO of the SchuF Fetterolf Group commented: “We are very pleased with the contract award. We worked very closely with the coking industry over the past 3 years and noted all of the issues that affect traditional coking valve designs. Such issues as high purge steam consumption, reliability, casting quality, proprietary spare parts and functional & operational deficiencies have all been addressed with the new IsoPlug design.”

SchuF will be exhibiting the IsoPlug and SwitchPlug range of coking valves at Coking.com shows and Achema in Frankfurt in May 2009.

SchuF received the award in recognition of it’s world leading industrial valve contribution to the PVC, the PTA and coal to gas industries. More information can be found on the State of Hessen web site (German language): https://www.hessen-champions.de/index.php?article_id=487

This website uses cookies to improve your experience while you navigate through the website. Out of these cookies, the cookies that are categorized as necessary are stored on your browser as they are as essential for the working of basic functionalities of the website. We also use third-party cookies that help us analyze and understand how you use this website. These cookies will be stored in your browser only with your consent. You also have the option to opt-out of these cookies. But opting out of some of these cookies may have an effect on your browsing experience.
Necessary Always Enabled
Necessary cookies are absolutely essential for the website to function properly. This category only includes cookies that ensures basic functionalities and security features of the website. These cookies do not store any personal information.
Non-necessary
Any cookies that may not be particularly necessary for the website to function and is used specifically to collect user personal data via analytics, ads, other embedded contents are termed as non-necessary cookies. It is mandatory to procure user consent prior to running these cookies on your website.
SAVE & ACCEPT