SchuF has developed five leading valve designs for coal gasification. From the very earliest coal gasification plants in South Africa (Sasol) to the latest installations in the USA (GE, and Valero) to Shell and Siemens in Europe, you will find SchuF valves. 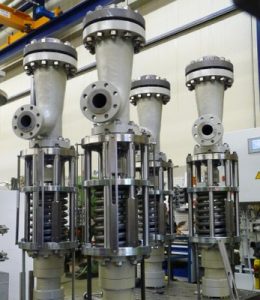 Coal gasification technology uses coal, refinery tars, high sulfur fuel oils and mixes them with oxygen and steam in the reducing environment of a gasifier to obtain syngas (mostly CO & H2) which can then be used either as further feedstock for the chemical industry or for gas-fired power stations.

In the Shell process, the coal is finely ground and transported via a carrier gas into a gasifier. The control of the flow of the coal suspended in carrier gas is a critical and complex task for a control valve. Complex because the valve must be sized in a way to prevent settling of the coal in the valve, which means maintaining certain minimum speeds of coal flow. However at these speeds, the coal is very abrasive, which means that the choice of material will have to include solid Tungsten Carbide parts. 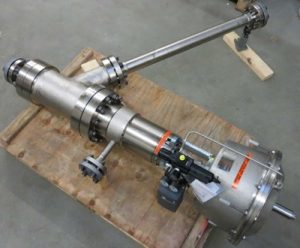 Model 74CH  – “ToughFlash” Design,  Photo: ©SchuF
In addition, further coal feed control valve technology was developed for the Shell process resulting in many unique features that enhance its performance, as well as to ensure a manageable cost level.

The high solids content mean that a multi-stage control valve is not suitable, while the abrasion means that a traditional single seat will erode too quickly, leading to a special control disc and seat design. Finally the clean air requirements mandates the use of a bellows into the yoke. This bellows must be protected from the very coal that it is meant to seal.

SchuF has designed and delivered valves for most coal gasification methodologies on the market today including the Lurgi, Sasol, GE, Shell and Siemens processes.

SchuF has also supplied let down control valves as well as process flow Multi-stage Angle Valves for other severe service and refinery applications such as Hydrocracking and Coal Liquefaction.

Are you looking for a special valve design fitting your requirements?

Any cookies that may not be particularly necessary for the website to function and is used specifically to collect user personal data via analytics, ads, other embedded contents are termed as non-necessary cookies. It is mandatory to procure user consent prior to running these cookies on your website.