Vacuum distillation is one of the oldest and most important refinery processes. SchuF specialises in producing refinery valves that improve efficiency and deliver significant cost savings.

Vacuum distillation is the process of separating atmospheric residue to produce heavy, medium, and light gas oil as well as a vacuum residue. Approximately 50% of the VDU output is light or middle vacuum gas oil that are typically processed further in distillate hydrotreating units. They are relatvely unproblematic. Please see top left tab for VDU process steps.

Heavy gas oil or vacuum residue make up the rest. The vacuum residue is a thick slurry like medium with an API rating in the range of 5° to 7°. As a result, VDU pipelines and equipment can clog and capacity is severely reduced. This is illustrated in the picture below, which shows two ball valves (onr open and one closed) interconnected with a T-Piece. The dead space area is shown in black.

The answer to this problem in the past has been to continuously back flush the lines to remove sediment and slurry that has settled in dead spaces – typically in piping T-pieces or ball valves. However, continuous flushing adds cost and reduces VDU capacity by approximately 10%.

1) The No Dead Space Diverter Valve

The SchuF VDU Diverter valve shown above eliminates the need for continuous back flushing. The associated dead space accumulating equipment (t-pieces and ball valves) are replaced by the SchuF diverter valve.

Because the diverter valve is dead space free, continuous flushing is no longer required. The piston (in green) on the left hand side closes the left leg and is flush with the inlet. The right hand piston is in the open position but seals flush with the outlet. There is no redundant space for sediment, slurry, or coke particles to settle. As such the SchuF diverter valve can be seen as a seamless extension of the plant piping. 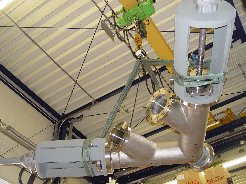 In addition the valve is more compact than the comparible t-piece and ball valves. Finally, it allows the medium to be routed into 2 or more process lines – one for example for intermediate storage and the second to a FCC  or delayed coking unit.

Isolation and Emergency Shut Down Valves

As with the special VDU Diverter valve, SchuF has worked with several refiners and engineering offices over the past few years to create a reliable emergency bottoms isolation system. This can include the above mentionned diverter valve or be achieved through a combination of:

The SchuF Y-Globe valve is ideal for distillation processes due to it’s ability to handle large flow rates in an unimpeded manner. This is a result of it’s:

Like the diverter valve, the Y-Globe eliminates dead space with the use of piston or back seating options. It can be provided with a quick opening or closing on/off trim. It is the ideal isolation valve for vacuum residue isolation applications.

In a fire related emergency in the CDU and VDU section of the refinery, the emergency shut-down control valve is critical. SchuF has designed a special heavy duty control valve with on/off functionality that is:

All three of the valves profiled in this expose bring significant safety and efficiency  benefits to the vacuum distillation unit.

This website uses cookies to improve your experience while you navigate through the website. Out of these cookies, the cookies that are categorized as necessary are stored on your browser as they are as essential for the working of basic functionalities of the website. We also use third-party cookies that help us analyze and understand how you use this website. These cookies will be stored in your browser only with your consent. You also have the option to opt-out of these cookies. But opting out of some of these cookies may have an effect on your browsing experience.
Necessary Always Enabled
Necessary cookies are absolutely essential for the website to function properly. This category only includes cookies that ensures basic functionalities and security features of the website. These cookies do not store any personal information.
Non-necessary
Any cookies that may not be particularly necessary for the website to function and is used specifically to collect user personal data via analytics, ads, other embedded contents are termed as non-necessary cookies. It is mandatory to procure user consent prior to running these cookies on your website.
SAVE & ACCEPT